DONATE
About Us
We believe that some forms of giving can go farther -- distance, time, and even generations.

Fola, or Fountain of Life Africa, is a Christian non-profit organization run by a volunteer board and individuals in the US and Zambia, relying on personal and corporate donations to fund infrastructure projects, employing local labor and sourcing all supplies and materials from the community where available.

With an operating overhead of less than 10% (fully funded by the volunteer Board), we pledge that 100% of your donation goes directly to our projects and provide full transparency of financial allocation.

Thanks to our supporters, thousands of children are attending school for the very first time, hundreds of mothers and babies are surviving childbirth, and communities are thriving due to clean water. We are making great advances in all of these areas, breaking the cycles of poverty, disease and gender inequality.

What we are COMMITTED TO

Water
Diseases from dirty water kill more people every year than all forms of violence, including war. Studies have shown that 43% of those deaths are children under five years old.  Access to clean water and basic sanitation can save around 16,000 lives every week.

Education
Education is a fundamental human right for all, not just the privileged few.  Globally, twice as many girls as boys will never start school.  However, each year of education delivers an additional 20% increase in wages for girls (compared with 10% for boys).

Health Care
In rural areas, medical facilities are desperately needed to reduce the risks of malaria, HIV infections, and malnutrition. In Zambia alone, 40% of children under five have stunted growth, while 15% suffer from malnutrition.
HOW WE GO ABOUT DOING IT

Fundraising
We rely on individual and corporate donations to fund infrastructure projects. We operate Fola through a volunteer, working-and-giving Board, so that 100% of donor funds can go to projects, not overhead. We go out of our way to ensure that our generous donors can have the confidence that every cent they give is directly applied to an identified project or one of their choosing.

Construction
We employ local labor and source all supplies and materials from the local market, where available. We set a target of 10% of construction costs to be funded by the benefactor community, usually achieved by contributions to unskilled labor or basic materials, in order to build ownership and commitment to the new facilities.

Handover
We partner with the local community and governmental leaders to select sites, speed project completion, and identify sustaining plans. We then transfer ownership of all new facilities to the local community along with government commitment to the proper staffing of new, qualified personnel, such as teachers, nurses, doctors, aides, and administrators.
HOW WE CAME TO BE 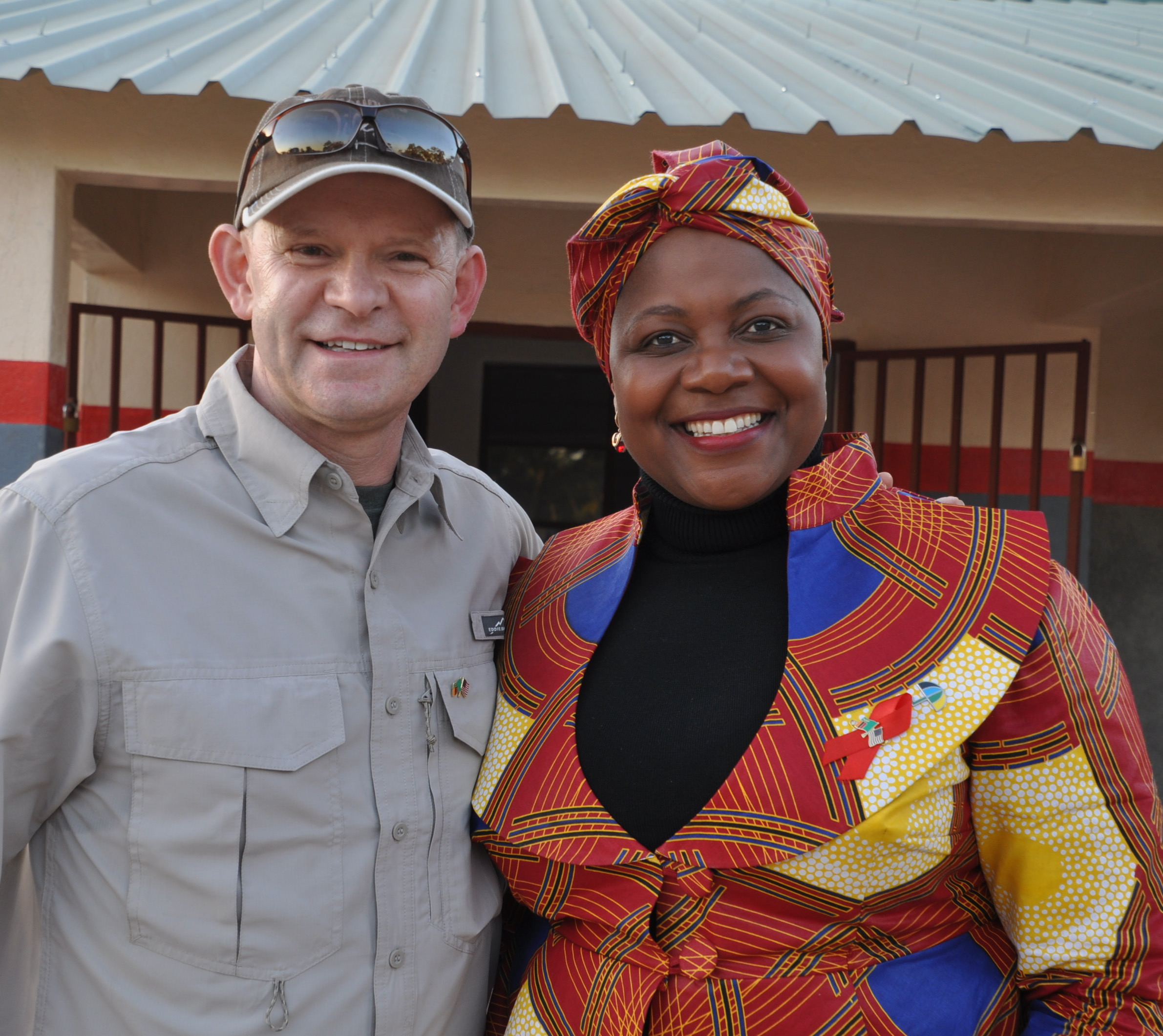 Fola was born as Fountain of Life by Princess Kasune Zulu in 1998 in Luanshya, located in the Copperbelt province of northern Zambia. Princess was orphaned and became head of her household at age 17. Upon learning of her HIV status, Princess felt compelled to use the remaining days of her life, no matter how many, to make a difference for others. Her aim was to tackle the harsh cycles of poverty and illiteracy, as she knew that they contributed to the high rates of HIV and AIDS in her country.

But where to start? Since children were not being educated, Princess decided to start a small school for a few children in her home. She expected less than 20 children to show interest, but, when she opened her doors for the first day of school, nearly 60 children were waiting for her! These children were orphans or from very poor families, so, hearing the pleas of their guardians, she took all of the children in. On that day, with only US$10 (50,000 Kwacha) to fund the project, Fountain of Life was born.

On each school day in her home-based school, Princess provided basic education and one meal for the children in her care. Soon, the community saw the importance of her work and joined her efforts by helping to support a new school. Five years later, Fountain of Life moved to Kitwe, where nearly 1,000 children were supported with school supplies and food programs.

“Upon learning of her HIV status, Princess felt compelled to use the remaining days of her life, no matter how many, to make a difference for others.”

In 2009, Princess felt the call to dream bigger. With 60% of Zambians living in rural areas and a gross lack of governmental funding in social welfare, Princess knew that many of the citizens of her country were going without life essentials. The government was investing in cities and the larger NGOs were reaching mostly those in the cities and peri-urban areas. Princess knew that she needed to focus specifically on the plight of children and communities in rural Zambia. She embarked on a campaign to raise US$10,000 for desks at Shampande Primary School, which is located in the Chibombo district, the ancestral home of her father.

About this time, Princess met Mark Seymour, a Silicon Valley technology executive. In his youth, Mark’s father’s work led him from Great Britain to Zambia. These childhood years shaped Mark -- playing with the local children just as he would with friends back in England, except running around without shoes on, exploring in the bush, and getting into mischief -- and forever tied his heart to this place. Consistent with this, Mark was sponsoring children in Zambia through World Vision when a representative of that organization, Princess Kasune Zulu, came to his church, WayPointe Christian Fellowship in the San Francisco Bay Area, to speak at a community AIDS event that Mark helped organize. From that point on, Mark and Princess were a team, a dynamic duo who were determined to make a difference.

“In 2009, Princess felt the call to dream bigger. With 60% of Zambians living in rural areas and a gross lack of governmental funding in social welfare, Princess knew that many of the citizens of her country were going without life essentials.”

Upon arriving at Shampande with Princess, Mark and an elder from WayPointe, Gary Englund, immediately recognized the stark need for a new school building to accommodate the desks being donated during the trip. This resulted in the co-founding of the US entity Fountain of Life Africa in 2010, officially registered as 501(c)3 non-profit organization in early 2011. With Mark in the role of Executive Director and the first Board Chair, they raised $50,000 for a new school block at Shampande, comprising three classrooms and two offices. The building was dedicated to the community and government in September 2011. And they didn’t stop there.In the years that followed, the organization raised funds for Shampande to construct teachers’ flats and a science block, along with student sponsorships, teacher scholarships, laptops, and to run an annual sports day.

As Fountain of Life Africa (now rebranded as Fola) enters its 10th anniversary year, it’s mission to improve the quality of life of rural communities through increased access to clean water, education, and healthcare, remains unchanged -- but rather, emboldened. With two clinics, nine schools, and over a dozen clean water boreholes constructed over the past decade, hundreds of mothers and babies are surviving childbirth, thousands of children are attending school for the very first time, and tens of thousands in communities across Chimbombo are thriving due to access to health care and clean water.

In 2021, Fola is committed to the expansion of essential health care services and has set its sights on constructing two new rural health clinics, a mini-hospital (serving over 21,000 residents), plus at least two new primary schools, with clean water at all sites. Every year, Fola seeks to grow its reach, and further its mission, touching more lives in ways that will be seen for generations.
learn more
Make a difference.
Partner with us as an investor in African rural communities where we are committed to drilling wells, building new schools, and providing basic health care facilities.
GIVE NOW

Fola (Fountain of Life Africa) 2020. All Rights Reserved - 501(c)3 Not For Profit Organization